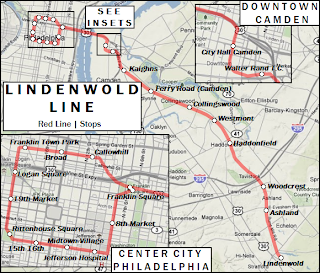 The final full line utilizing the Loop is the Lindenwold Line.

This line already exists: it is called the PATCO Lindenwold Line (colloquially, just PATCO) and it utilizes the east and south sides of the Loop framework, terminating at 15th-16th (the tunnel ends at 18th, or Rittenhouse Square). Added to the existing system is a new stop between Walter Rand and Ferry Avenue (mislabeled on map, mea culpa) at Kaighns Avenue. Another possibility is the closure of the Ashland station and its relocation closer to the Echelon Mall (it is currently a mile-long walk between the two), although rail transportation tends to be separated from destination uses in South Jersey in the grossest way. Woodcrest is a natural park-and-ride, right off 295 and the New Jersey Turnpike*.

The lack of fare parity between this line and the SEPTA network is one of the major barriers to its incorporation into the Loop. Two possibilities exist for the amelioration of this: either the PATCO fare is amortized with SEPTA's such that free transfers are in fact possible where the two lines interconnect, or SEPTA leases PATCO such that the separate PATCO fare is eliminated. Either way, the fare separation ensures an additional barrier for New Jersey patrons wishing to access Philadelphia, thereby undermining the goal of access; furthermore, the Lindenwold Line is the connecting through-route linking lines terminating in Camden (such as the River Line and proposed Glassboro Line) with ultimate destinations in Center City. Making these connections as easy as possible plays its part in inducing transit ridership--one of the major goals of the program.

Finally, some of you may notice that the Lindenwold Line and 25th Street Line terminate in the Loop, coming from opposite directions. There is the possibility of them interlinking, such that trains originating in Lindenwold terminate at Sports Complex South, but the major reason I declined to show this is because if these lines were joined it becomes exceptionally difficult to properly balance service within the Loop, since if the joined line uses one section of the spine, it disproportionately adds service to just that section, and if it is broken up so that each direction uses a different section of the spine, it disproportionately services one direction at all stops over the other direction. The only ways out of this operational asymmetry in Center City are to either: (a) terminate the two services in the Loop, running opposite directions, or (b) introduce an extra service to terminate in the Loop, running the direction opposite (clockwise), assuming 25th-Lindenwold service is split such that each direction runs different branches of the Loop. This could work, but only if the Roosevelt Boulevard Line (see section here) is interconnected into the Loop...the current general idea, however, is that it terminates on the Broad Street Line at Washington Avenue and peak-hour Fern Rock express service enters the Loop. The connection is there via the Ridge Avenue Spur, which would be transformed into a maintenance track with the creation of the Pennsport-Andorra Line, but could just as easily be reactivated for a new service.
______________
* One of these two duplicate roads really needs to be closed. Seriously.
Posted by Steve Stofka at 11:06 AM