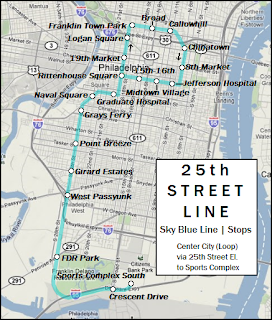 Our penultimate addition to the Loop Network segment of Philadelphia2050 is the 25th Street Elevated Line, a subway which follows the Pennsylvania's Delaware Extension from the Sports Stadium District to Washington Avenue, and then an underground right-of-way to Rittenhouse Square, where it meets with the existing Loop. This underground right-of-way follows Grays Ferry to South to 19th, about two miles.

This line fills a real need in South Philadelphia. Currently, transportation access in western South Philadelphia (west of 20th Street) is relatively limited and serviced mainly by the 2, 7, and 17 north-south buses, as well as the various east-west feeder buses (7 and G on Oregon, for example). However, South Philadelphia hosts the city's most-densely populated neighborhoods (by tract) and the neighborhoods themselves are very much inherently transit-oriented, when not unbuilt with suburban-style small-box Rite Aids and other such dross. South Philadelphia is, indeed, considered a North American example of European-style urbanity, and neighborhoods such as East Passyunk and Southwest Center City are booming, while Point Breeze is gentrifying.
Furthermore, this line is less expensive to construct, and can tap into more funding sources, than initially meets the eye. 25th Street makes sense because of an already-existing elevated line, currently used by Norfolk Southern and CSX to access Greenwich Yard and the Packer Avenue Marine Terminal; since nearly all of the subway line, other than the Rittenhouse-Washington Avenue segment, uses this easement (barrier-separated), or else otherwise existing or proposed Loop tracks, this line can be built via a public-private partnership with Norfolk Southern (the owning entity): as the existing trestle is quite literally crumbling, the partnership would involve a renovation of the trestle, benefiting all parties, along with the setting aside of about half its right-of-way for this use. Modern, ultra-efficient signaling will help enable this, as well as the single-track Arsenal Bridge creating a pre-existing bottleneck making the trestle just too plain wide for purely freight use. In exchange, direct structural ownership would transfer to the passenger rail operator for future maintenance.

The running of mass transit and freight trains side-by-side is feasible: it is commonly done in Chicago. 25th Street offers the best access of any alignment in South Philly--directly servicing SWCC, Point Breeze, Grays Ferry, Girard Estates, and Packer Park--and the formerly industrial badlands surrounding the trestle offer abundant opportunities for upzoning in the city's fastest-improving section. Finally, since one of the propositions of Philadelphia2050 is that the city is both large and dense enough to support heavy rail mass transit within the most-urban core, this heavy-rail running is accomplished via the least expensive means available, and that is the repurposing of existing infrastructure.
Posted by Steve Stofka at 9:35 PM