Two major new approaches to street designing are being tested in Europe and the Americas: complete streets and naked streets. These approaches emphasize completely different aspects of the street: by separating every conceivable use into its own carriageway, complete streets emphasize the transportation use of the road, while by designing the whole road at a pedestrian scale, naked streets emphasize its public-room aspect. Local street space, whether a grid byway or suburban cul-de-sac, is an ad hoc shared space, if not de facto, which is why I prefer the earlier term "naked street"--a street space designed to be shared by motorists and pedestrians.
Because of complete streets' transportation aspects, they can range in width all the way from fifty feet (Philadelphia's historic street width) on up; it is difficult to downscale them any further. Complete streets usually have, at the very least, two ten-foot sidewalks and a bike lane in addition to traffic lanes; worse, the traffic engineers have a predilection to design the traffic lanes first, creating "complete" roads--still designed for cars first and foremost, with non-motorist design features added at the end of the process to placate NIMBYs and such. Essentially, the added carriageways (two sidewalks and bikeway) become expensive and nigh-useless ornamentation.
However, complete streets on a small scale, such as Center City's Spruce-Pine bike lanes, with two 10 ft. sidewalks, a 10 ft. traffic lane, 10 ft. parking lane, and 10 ft. separated bike lane, can make sense in the broader urban context, as a way of deploying velocentric arterials into the street grid. Larger complete streets at boulevard scale, such as the Wynnefield Heights plan's proposal to widen City Line Avenue, in order to incorporate a dedicated 30 ft. transit right-of-way, four 12 ft. traffic lanes (six southeast of Monument), and two 11 ft. sidewalks, for a grand total width of 100 ft, similarly, only work in an arterial context with abundant crossing possibilities and superlative transit access. The fact that complete streets only work on arterials makes it temptingly easy, especially when the arterial is a highway arterial, to overengineer it into a complete "road" instead. For engineers, who seem to be trained to put as much concrete into something as the budget will bear rather than optimizing the mix of uses, this temptation is overbearingly powerful.

Naked streets are primarily European, and emphasize narrow streets lined with pedestrian uses and amenities, no signage whatsoever, no barrier between pedestrian and motorist whatsoever, and very subtle (texture changes are popular) differentiation between vehicular and non-vehicular "zones" on the street. Since scale and detailing prioritizes the pedestrian, a naked street is in essence a pedestrian zone the motorist "borrows" for the duration of his trip. Since this is not the motorist's element, the perception of a lack of safety, on his part, is greater, and thus (ironically enough) the street is safer*. They are clearly rooted in traditional urban paradigms, and are thus of great interest to Old Urbanism, as a nascent movement of sorts. Unlike complete streets, narrow streets can fit in far narrower rights-of-way--even as narrow as the 12 ft. Nathan Lewis likes, or, in the American landscape, probably more commonly the standard width of the city's streets, as determined by prewar building tradition (50 feet in Philadelphia, for example).

Since complete streets' and naked streets' optimal widths are so different, with only the teensiest overlap at 50 ft., a scalar system immediately suggests itself...a scalar system which looks, remarkably enough, quite like Philadelphia's grid, with 75 ft. complete-street arterials, 20 ft. naked-streets, and finally sub-20 ft. mews running through the blocks defined by the naked streets (Philadelphia's grid is historically 50 ft., with the exceptions of Market and Broad, at 100 ft., all of which was considered generously wide in 1700). The end result is a street paradigm which promotes a built form extremely close to the older parts of Philadelphia and Boston, such as can be seen below. 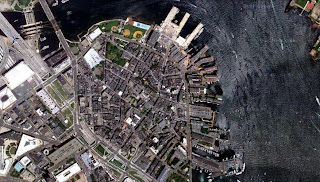