The Great Plains of North Philadelphia

(aka the Logan Triangle)

Philaphilia's GroJLart has on Naked Philly a feature about the ruins of the Logan Triangle, a region of subsiding land due to poor fill over the now-turned-into-a-sewer Wingohocking Creek. This area came to be because the dwellings there were simply made uninhabitable--which, of course, means that all but the most marginal uses of the site would have to deal with the sheer expense of environmental remediation.

Uses discussed on the comments include (1) a park, (2) a tree farm, (3) urban agriculture, (4) a golf course, and (5) a solar farm. Each of these has advantages and disadvantages.

The park sounds good in concept, but rapidly runs into a slight problem: it would be immediately across the street from the similar-size Hunting Park, which already has maintenance issues of its own. If we can't afford to maintain Hunting Park, why on earth should we put another Hunting Park right next to it?

The tree farm would not be yielding foodstuffs, so it can use the land as-is.

Urban agriculture would be yielding foodstuffs. The ground is contaminated. However, similar conditions don't stop Greensgrow. Like operations could certainly be set up throughout the area.

The golf course sounds like a pretty decent idea--but what about the contamination? And a larger issue--how would you market it? It seems like only an Arnold Palmer-designed course or something along that vein would be able to attract the golf-club set to that neighborhood.

--And all of these have to sort out the ownership situation. The original subdivision was for residential properties; since, however, the conditions of the Logan Triangle prevent residential development, a core need is thus to ensure all the properties in the Triangle are consolidated before they are re-subdivided for whatever future use(s) will exist on this site. This will likely take the form of block conferral. Consolidating all these blocks into superblocks would still be detrimental to the long-term access of the site, and should not be considered short of a use necessitating a superblock (like a golf course).

The most likely result should be a variety of agrarian uses springing up on each block--tree farms, food farms, and solar farms--with perhaps a narrow band of commercial fronting the Boulevard (depending, of course, on the viability of the ground conditions). This could be done as a farmer's market--a wholesale space for each of the ten-to-fifteen or so potential properties within this site. Furthermore, the site can be developed through a collaboration between successful urban ag operations (Greensgrow, the Mill Creek Farm, etc.)--particularly those dealing with raised-bed operations--and the Logan neighborhood, so that these farms are not just some outside operation, but an important source of revenue and foodstuffs for the neighborhood itself. This, of course, provides work and ownership in one of the poorest parts of the city, and so catalyzes a local reinvestment cycle.
Posted by Steve Stofka at 10:43 AM 8 comments:

Decline and Decay; Planning for Revitalization on Market East

Option (3) includes the secondary anchors, and adds inverted inline through Strawbridge's main hall, possibly bounded by another secondary anchor. This formation, however, relegates anchorage to the Mellon Independence Center's retail--essentially, the Ross. (A later post hopefully treats this). It also loses the largest potential salable space in Center City--even if you were to empty out all the inline shops in the Shops at Liberty Place (again, later post) and replace them with a full-scale full-line department store, the total retail space would still be smaller (although perfect for a higher-end anchor, like Bloomingdale's or Neiman Marcus). It loses, in other words, one of the best department store sites in the City.

For these reasons, I favor attempting Options (1) and (2) before attempting (3); (3) is, in some ways, a sign of defeat. To me, the best option would be bringing Boscov's to the entire space, which is now down to a large full-line department store in size; with the Strawbridge's building fully occupied and Girard Square built, development attention would then focus on 800 Market (the original Gimbels, aka the Disney Hole) and 1301 Market. It may take some time for this--the Manhattan Mall is useful as a case study. For nearly a decade, from 2001 (when Stern's was folded into Macy's), to 2009 (when J.C. Penney moved in), the Manhattan Mall's primary anchor space lay vacant. And this was in New York--just off Herald Square, where Macy's flagship is!

____________
* Stern's seems to have snapped the Gimbels lease right up.
** Had this happened, it is likely that the former Gimbels (whose retail space was curtailed to its bottom three floors, two of which were occupied by Clover and later Kmart, ca. 1990) would have either (a) been converted into a Men's or Furniture store (there are examples of both), or (b) lain vacant much as Strawbridge's has for the past five years.
*** This also makes Bon-Ton's shedding of its (historic) Carson's and Younker's downtown locations seem particularly short-sighted. Bon-Ton did develop a bad habit of vacating the downtown stores it acquired, starting(?) with Allentown's Hess's.
^ Which is partly why I helped found, and continue to maintain, the Concerned Citizens for Market East. The sign bill offered a useful instrument for reinvestment, and the policy line being held by SCRUB was definitely not going to do the job. Indeed, over the past two years they had made themselves look silly by protesting what was entirely reasonable large signage at 1234 Market and on the Thomas Lofts' party wall.
Posted by Steve Stofka at 11:49 PM 2 comments:

A strange thing is happening at Drexel's academic quad. After suffering the "indignity" of being named the country's ugliest campus last decade, and needing to keep up with demand and growth, Drexel is modernizing and replacing a large part of its campus. And it's doing so with some damn good architects. Erdy-McHenry, for example, designed two residence halls, and a Daskalakis (note Greek origin) annex shows the same Bauhausian mold.

The two major academic hall projects, however, are the Papadakis (told you to note it) Integrated Sciences Building and the new LeBow building, which is to replace the (now-demolished) Matheson Hall. Papadakis is now complete and open; construction on the LeBow building will start shortly. Drexel Master Plan provides images of both:

Both buildings are being designed with white façades, and in geometrical molds--decisions which hearken back to the genesis of Brutalism: specifically, the celebration of béton brut ("raw concrete") as a sculptural form. Because (especially high-quality) concrete is white, like at the Radian (poorer-quality concrete is grayer, however), and not everyone caught up in the Brutalist zeitgeist particularly liked concrete, several other white façade materials also got used, most commonly limestone. Temple's campus has examples of both trends: Anderson and Gladfelter Halls are limestone-cladded; Pearson, McGonigle, Wachmann, and Weiss Halls--as well as the Paley Library--are concrete-cladded. (Pearson and McGonigle's are being sheathed in their current renovation project.)

Another major element of Brutalism is it came into vogue during the 1960s; as the decade marched on, the demand on design became increasingly "riotproof". And so the white (more usually gray) concrete and stone (and occasionally aluminum) high Brutalist buildings morphed into these looming low-rise brick anti-urban education fortresses, buildings which deliberately turned their backs on their surroundings, so to speak, offering only an easily-controllable entryway between inside and outside. The great repudiation of high modernism, postmodernism, was as much a reaction against this as it was against the '70's monolithic glass steel tubular towers. (Even high Brutalism was oftentimes extremely ugly, except in the hands of masters such as Kahn and perhaps Pei, but late academic Brutalism was purpose-built ugly.)

Ignoring, for the moment, the interesting historical issue that one of the styles Stern was revolting against when his career started was Brutalism, what we have with Papadakis and LeBow are two clear examples of a new Brutalism, by which I mean an architectural style celebrating geometrical form and classical whiteness**. But, unlike the examples of high and especially later Brutalism, what we are looking at is a style that does not insulate itself against the street, but rather opens itself up to it (if not quite outright celebrating it). Inside can be seen from outside and so forth.

This "Neobrutalism" seems to be flowing from an admixture of Postmodernist and neo-Bauhaus ideas, and general architectural fads--but this may well be the vanguard of 2010s academic architecture. Howso urban is it, really? Better than late Brutalism--but is it as urban as the work of the past decade?

Aesthetic questions to ponder.
____________
* A campus-related project also shows certain similarities.
** ...More like Renaissance whiteness. Greek and Roman ruins, by the time the Italian Renaissance rolled around, had lost all their color through the fading of paint, among other things. That said, the Giza pyramids were also built shinily white.
Posted by Steve Stofka at 3:02 PM 1 comment:

University City, Or, How I Learned To Stop Worrying And Love Hypertrophism

Philadelphia's core is filled with classic grid urbanism, in a tradition handed down from aeons past. It is replete with narrow and ultra-narrow streets marching along the north-south axis of a key avenue, Broad Street, as well as along the waterfront axis controlled by Kensington Avenue.

But travel a mile or so west, beyond the University of Pennsylvania, and the nature of urbanism becomes very different. Instead of the grid controlling for close-in and narrow streets, it controls for wide, formal avenues in a quasi-parklike setting. The buildings become Victorian confections, and the hypertrophism that develops remains wholly pleasant. It is a different way to build a neighborhood--the streetcar suburb--but by no means is it invalid. This is a good example of what I mean when I say there are multiple optimal human habitats; just as the traditional form is optimal for one type of urbanism, so too is this form optimal for another.

The real danger lies when regulations enforce one type of urbanism over all others. This constricts supply for other types of urbanism, and when the type favored by regulation becomes déclassé--as is happening today--supply constrictions force prices to skyrocket.

More photos here.
Why does University City succeed where later hypertrophism fails? Walking this neighborhood is like walking in a park! No wonder why neighborhoods such as this are so popular--there is a certain attraction to living in a park.
Posted by Steve Stofka at 11:22 AM No comments:

This is the long-awaited weeks-late follow-up to the first part of this photo essay--especially important since Charlie, Emily Washington, Linda DePillis, and Phillip Kennicott, have all picked up on the same idea. Emily additionally suggests that the same pattern is likewise evident in the annual Burning Man festival. 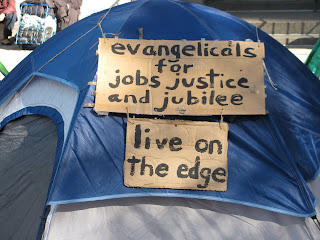 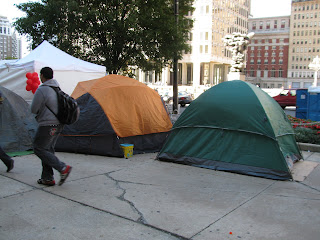 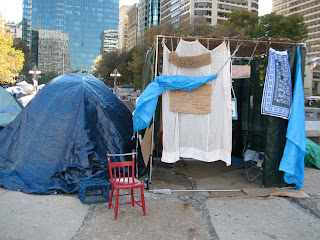 This is not some isolated thing, either. Even the most rudimentary group camping self-organizes as a village around the center of the campsite (i.e. where the picnic tables and campfire are).

I may well get around to a Part III...Stay tuned!
Posted by Steve Stofka at 4:34 PM 2 comments: