Cost-Shifting on the Boulevard

Looking through the Lower (Near) Northeast Master Plan, I noticed that the early-2000s study for a Boulevard subway cost $3.2 billion, and was tabled due to cost.

And then I looked at the render, and it hit me that it doesn't need to be that much, at least on the public-transit end of things.

A subway is merely one of the (rather long) list of improvements the Roosevelt Boulevard desperately needs. For somebody who is normally very pro-highway-privatization and anti-highway-investment-other-than-maintenance, it may come as a surprise that I agree that the middle (express) lanes of the Boulevard very, very desperately need to be sunken out of the way; because it acts effectively as something between a malformed boulevard and a surface interstate (though, I hasten to add, not as much a true stroad), the Boulevard has a deplorable safety record. Indeed, multiple Boulevard intersections are regularly among the country's 10 least safe.

And because the Boulevard is a 4x3--a 12-lane surface road with three medians (four cartways of three lanes each), it is hell for pedestrians to cross, except at the few intersections where the express lanes have already been depressed (e.g. Cottman). Which leads to abler pedestrians pushing the light. Which leads to accidents between them and drivers (particularly on the express section)...

The Boulevard is one of the few places where "improvements" will actually improve things. Safety on it is that bad, due mainly to it retaining a 1930s-era design.

The only effective way to make it safer is to depress the express lanes, so they act as a true road, and the local lanes restructured to act as an, er, boulevard.

In the act of depressing the Boulevard's express lanes, you'll also create a rather large, rather wide median. (About 40 feet.) A rather lard, rather wide, rather transit-ready median. In doing so, we export the costs of prepping the land (i.e. the median) to the highway department.

And this, in turn, sinks--by quite a lot--the necessary cost of developing a Boulevard subway.

Here's what I believe is the optimal phasing:
Phase 0: sinking the express lanes, incidental prepping of the transit median, highway expense
Phase 1: extending along this median to Cottman
Phase 2: extending from Cottman to Bustleton or Byberry

...And another thing: By sinking the express lanes and providing good transit in the median, we can also free up the space above for an alameda with a bikeway in the middle. It wouldn't be cheap, sure, but the potential's certainly there.

And with the middle express lanes sunk out of sight, out of mind, the heart of the Northeast would start feeling much more pedestrian-friendly.
Posted by Steve Stofka at 6:15 PM No comments:

Email ThisBlogThis!Share to TwitterShare to FacebookShare to Pinterest
Labels: Planning, The Boulevard, Transportation

What does that mean?

Most superficially, all of the zoning designations in the city have changed. R-10a is now RSA-5, C-2 is now CMX-2, and so forth.

But there are other important changes. The biggest of these is that the Zoning Code is now contextual.

What does that mean? Think of it as a compromise between Euclidean and form-based zoning--while the theoretical structure of the code is still Euclidean, the contextual zoning means that form-based elements are taken into consideration. RSA-5 is essentially each of the three or four different rowhouse designations under the old code mixed into a new designation; the contextual element means that new construction will ideally match existing construction elsewhere on the block (i.e. have the same setbacks, etc.). But large deviations from the norm trigger design review and (probably) rejection.

In short, the code still doesn't allow you to build a commercial addition to your residential property by right (unless your neighbors already have such additions), which is a shame, largely because while it is much less rigidly Euclidean than the old code, it still doesn't allow for the flexibility of use a fully form-based code would.

On the flip side, the new code has made densifying existing commercial corridors significantly easier. CMX-2.5, now the standard on most commercial corridors, allows for mixed-use development up to 55 feet high. 55 feet is by no means an arbitrary number: most major Philadelphia streets are either 50 or 60 feet wide, which means that CMX-2.5, when applied to its utmost, allows commercial streets to achieve a 1:1 street width-building height ratio*.

This does not bode well for midcentury commercial areas, largely because the Philadelphia variant of googie favored single-story commercial structures--essentially, strip malls even if they fronted the sidewalk. We need to undertake documentation efforts, and ensure that an outstanding handful are preserved--primarily in communities where supply and demand are already well-balanced--as well as individual examples that are exemplars of the style (such as Stein Florist at Frankford and Princeton). In this way we can retain a record of the appearance of the built environment without impeding redevelopment and densification of our commercial cores where they are most needed (e.g. along Frankford and Castor).

While the code ensures Center City can be denser and more of a skyscraper canyon than ever before with "Super" CMX-5**, it still underzones other important commercial nodes, leaving them at CMX-2.5 where a FAR-based zoning would be more appropriate. Chelten, Front and Girard, 52nd St., and Bridge-Pratt are exemplars of this issue; all are (or were) crucial commercial centers; all should (probably) be bumped up to CMX-4 (500 FAR, or five stories by right); the main difference is the lack of height limit on the latter. Germantown and Chelten is an example of a cluster of taller buildings that such an upzoning would allow emulation of. Likewise, first steps are being made towards TOD identification and implementation (although that is something that needs to be hashed out in the neighborhood plans).

With parking requirements (one of the more insidious auto subsidies), the Code, again, shows steps towards more current understandings of the role, but not a willingness to fully embrace current understanding. Rowhome parking requirements have been cut out entirely, but larger residential structures still require them, and base commercial requirements have not been changed at all (still at one spot, i.e. 250 ft2, per 1000 ft2 of commercial space). On the flipside, TOD, car sharing, bike sharing, etc., bonuses quickly, and drastically, reduce them or chop them out entirely. Good for Center City, bad for the Northeast.

I am unsure if RSA-5 is also height-contextual; I believe it partially is, due to 3rd stories on mostly 2-story blocks now needing to be stepped back. Comments have cleared this up. 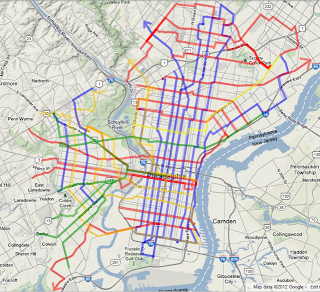 This image shows the primary mass transit grid in the City of Philadelphia. Key: Blue = north-south, red = east-west, yellow = north-south parts, east-west parts, green = trolley network (as it is an integral part of the grid).

The map has been abstracted, so that bus routes are only one line, in order to retain some legibility. Source file here, to download as a KML and play with.

Some changes have also been made to the bus routes:
17 and 33 have been merged, as they are naturally the same route.
30 and 31 have also been merged, as it turned out they were a hot mess with really could only be resolved by merging them together.
The 7, 64, and a couple of others have had some particularly silly bumps straightened out (though with the level of abstraction, it's hard to tell).

With this working model of the grid, we can also see some issues to fix (with varying degrees of difficulty):
1. Concomitant with the model of splitting the 23, the 16 and 23's southern half can be merged, roughly from Germantown and Lehigh.
2. The 43 and (revised) 30 brush each other, but branch in opposite directions. Merging these two routes together, allowing the branched routes to be handled elsewhere on the grid, can further streamline operations (much like with the 17 and 33).
3. Juniata Park is lacking N-S grid connections; the 89 handles some of it, but not all, and violates the grid. What's really needed is for routes along Castor (an extension of the one to Rhawnhurst?), G, and probably ca. D, as well as a revamping of the 15 and 25 so that the former can better serve Port Richmond and the latter does not have several major turns in it.
4. Oft derided because of its low ridership, the 25 is, in fact, very important to the grid.
5. A N-S link is necessary in Grays Ferry (but the 64 bump is insufficient). Extending the 79 northward may help, especially if it can be to the 40th & Girard turnaround. Alternatively, the G can be revamped and a 30th-to-Oregon "L"-shaped route may be considered.
6. The 7 is unnecessarily duplicative, with the G along Oregon and the 48 north of Market. Shifting the 7 to 25th north of Market would greatly improve overall access.

What else can you see in the grid? Strengths? Weaknesses?
Posted by Steve Stofka at 8:49 PM No comments:

The new Comprehensive Plan has a new subdistrict of CMX-5 (old C-5), called "Super CMX-5", which has a FAR of 1600% (allowing 16 stories with 100% lot coverage) along the Market Street corridor in Center City.

...This is around 2/3 of the existing C(MX)-5 designation, already concentrated in Center City.

It makes sense to think of it more as a new ceiling zoning designation (CMX-6?), which allows us to start thinking about expanding C(MX)-4 and -5. These significantly denser zones allow us to upzone around subway and Regional Rail stations, especially in extant commercial centers, thereby offering (obliquely) a tool to create and leverage TOD.

In other words, "Super CMX-5" (=CMX-6 for all useful intents and purposes) allows "normal" CMX-5 to be applied at e.g. Broad and Spring Garden, Broad and Washington, Broad and Girard, Broad and Lehigh, Broad and Erie, Front and Girard, and so on. It also allows CMX-4 to be applied along Chelten Ave. and 52nd St., and around Frankford, Olney, and (maybe) Wissahickon Transportation Centers.

Instead of concentrating all density in Center City, it allows us to spread it along our mass-transit system, thereby creating more use, more ridership, and (eventually) a tool for developing and re-developing along new mass-transit corridors.

(Which brings up the issue of demand- vs. development-oriented transit, but still...)
Posted by Steve Stofka at 4:57 PM No comments: