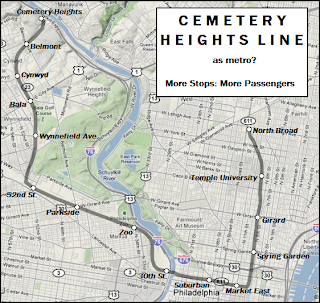 Some time ago, I wrote about my proposed extension of the Cynwyd Line, perpetually SEPTA's lowest-performing, to a park-and-ride by the Schuylkill Expressway, quite a long bridge across the Schuylkill River from Manayunk and just outside of where the Expressway enters Philadelphia proper. My proposed park-and-ride terminus got some flack, and I defended my justification of one there based on a need to balance maximized access with local station-side upzoning (both increase ridership, and upzoning does it in a more natural way, but park-and-rides offer maximized access only where auto infrastructure, i.e. freeways, and rail infrastructure intersect). Based on in-system ridership from similar types of stations, I made the case this proposal would triple Cynwyd Line ridership while at the same time increasing Center City access.

Now I want to revisit Cemetery Heights*. Not because I am rethinking any of my earlier points, but rather because I am interested in how to further increase ridership. The Cynwyd Line, as it exists today, is extremely similar to the MBTA's lowest-performing line, the Fairmount. Both lines are substantially shorter than any other on the system, at about 10 miles each, and each has only five stations (Cynwyd has Suburban, 30th, Wynnefield Ave., Bala, and Cynwyd, while Fairmount has South, Uphams Corner, Morton St., Fairmount, and Readville). Even so, the Fairmount Line has a ridership three times that of the Cynwyd Line, and the MBTA is planning and building several new stations along the Fairmount Line: Newmarket, Four Corners/Geneva, Talbot Avenue, and Blue Hill Avenue. By just about doubling stations while maintaining the same line length, the MBTA is also doing something else: it is treating the Fairmount Line more like a metro. Granted, a metro using commuter-rail equipment, but a metro nonetheless.

The question I want to ask is can't we do this with Cemetery Heights, too? If we (a) add three new stations between 30th St. and Wynnefield Ave. (Zoo, Parkside, and 52nd St.) along with the two (Belmont and Cemetery Heights) proposed in the Cemetery Heights extension, and (b) extend service along the SEPTA main north to North Broad** with new local stops at Spring Garden and Girard***, given the high capacities the Center City tunnel currently allows, such a quasi-metro can be born. With reasonably frequent service (roughly every 20 minutes is the least frequent, I would suggest), and considerable upzoning and densification around the stations--something Philadelphia2035 is generally promoting anyway--we can come up with a ridership projection which assumes (a) parity between Cemetery Heights and Cornwells Heights (SEPTA's other major park-and-ride station) and (b) ridership increases at other non-core stations based on upzoning. We will peg average daily ridership at Belmont, Cynwyd, Bala, Wynnefield Ave., 52nd St., Parkside, 34th St., Spring Garden, Girard, and North Broad at 300, and treat, for the purposes of this analysis, 30th, Suburban, Market East, and Temple University stations as destinations for those alighting at other stations. We will assume 90% of riders are round-trip riders, and since this analysis is biased toward this, we will add a 10% contingency (assumption of one-way riders).

Thus 300 x 10 (average ridership per station times station count) = 3,000 + 1,100 (Cornwells Heights boardings = Cemetery Heights boardings) = 4,100 + 410 (one-way ridership) = a projected ridership on this line in this scenario of 4,510. This projection is likely an underestimation, due to, among other things, the tendency of such models to underestimate urban transit mode share, but it also demonstrates parity with the ridership of other urban Regional Rail lines (~5,000)...for once.

Of course, the trick is considering Cynwyd (Cemetery Heights) more a Subway 2.0 than commuter rail.
_________
* A justification can be made on naming the terminus Pencoyd Heights, after the name of the viaduct extending across the Schuylkill (Pencoyd), which formerly carried the Pennsylvania Railroad's Schuylkill Branch. This viaduct was taken out of service in 1986 due to structural concerns, and, since the rail line beyond parallels that of the active Norristown Line, there is currently very little reason to extend passenger service any further than the Schuylkill Expressway connection.
** This takes advantage of a track stub and the former coach yard at North Broad.
*** Or to Wayne Jct., or Fern Rock, or even Fox Chase or Chestnut Hill East...coupled into a through service as need be.
Posted by Steve Stofka at 6:18 PM