Now I want to talk about the highway system I would like to see in 2050. While the Philadelphia highway network is largely built-out, it is by no means in an optimal state, and in fact, the national trend of ongoing outer-edge investment over core and inner-suburb investment--the trend that held true until 2008 and that Tea Partiers are vainly and idiotically trying to reboot--has guaranteed that projects left unfinished by previous generations remain unfinished--even when they are enormous assets. 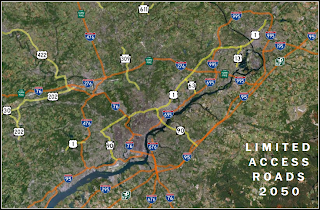 While I fundamentally disagree on any need for a true limited-access radial beyond 20 miles of the city center (and most cities throughout the developed world, and where their highway networks are fairly mature, developing, happen to have radials of that distance), and frankly the construction of the 202 bypass between Exton and King of Prussia via Chesterbrook was a major factor in the vampiric job sprawl out there sucking Center City's office market dry*, from a purely transportation planning viewpoint, one which attempts of minimize, if not outright eliminate, biases for or against roads or public transit, there are a few road projects necessary in the long term: increasing capacity on the grossly congested Schuylkill Expressway, via various means; separating the Roosevelt Boulevard's dangerous-to-traverse express lanes from at-grade running (that is, converting the express lanes into a highway), new or improved interchanges at I-95 and I-76, I-95 and I-276, and I-295 and I-276, as well as the N.J. Turnpike and the North-South Freeway, and so on. 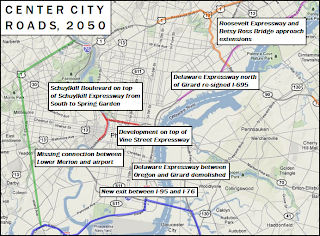 The two most important feasible road projects in the region--aside from alleviating the high degree of congestion on the Schuylkill Expressway--are the construction of an expressway link along the Roosevelt Boulevard, to facilitate through-traffic currently using the express lanes, and completion of a partial inner (~10 miles) loop, in large part to facilitate the dismantling of a large section of the Delaware Expressway, which would (hopefully) lead to the obsolescence and removal of the Vine Street Expressway and North-South Freeway north of the Walt Whitman Bridge approach, and perhaps in the longer term, the Schuylkill Expressway between City Line and the Walt Whitman, as well. I-95 would be strategically rerouted via the Walt Whitman Bridge, to the North-South Freeway, to I-295/N.J. Turnpike, where the Turnpike would function as express lanes and the former I-295 local lanes, the Delaware Expressway from Oregon Avenue to Girard Avenue would be dismantled**, and the access spur the rest of the Delaware Expressway would be converted to would be numbered I-695, north to the junction with I-276. 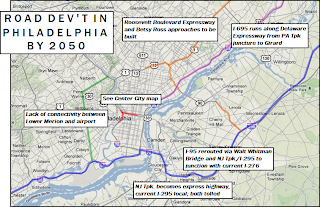 Of course, the elimination of I-295 as a highway designation north of the North-South Freeway creates something of a numbering void for the highways around Trenton. Since, with the completion of the (now-called) I-95/I-276 and I-295/I-276 exits, both of which sorely need to be built, a full loop road will exist around Trenton, this loop road would be called I-995. 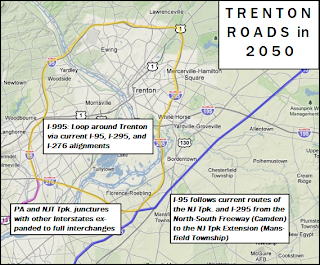 Of all these projects, the only one currently being worked on is the I-95/I-276 junction. This project will route I-95 to the N.J. Turnpike via the P.A. Turnpike--but at the same time, it does absolutely nothing to alleviate the issue of I-95's running directly through the center of Philadelphia. As a through road and not an urban spur, until I-95 can be rerouted off that alignment, the otherwise overengineered, overbuilt, and unurban Delaware Expressway will be forced to remain.

In the long term, of course, these projects would be financed via the bonds and tolls system common in the United States prior to the advent of the Interstates. Indeed, a dismantling of the current Interstate funding mechanisms (which ceased to be self-sufficient some time ago) in favor of a partly-public partly-private bonds-tolls system, in which existing highways are leased or sold off to private entities, who would then be in charge of maintenance*** and new starts would be funded by bond issues, paid for by tolls, and then leased/sold off when paid off, is my long-term road policy recommendation.
______________
* While Center City's office market usually shows between 75% and 90% occupancy, in fact the total amount of office space in Center City, over the past twenty years or so, has been subject to a number of downward adjustments, due to condo and apartment conversions of older office buildings (the most spectacular being perhaps the Aria at 15th & Locust and the Residences at Two Liberty Place in an overbuilt section of former Cygna headquarters). By my estimation, there is now only about half as much office space available in Center City as there was in 1990.
** Industrial access to the Richmond Marine Terminal being the main reason why it's not being dismantled further, all the way to the Betsy Ross Bridge.
*** This solution, note, is truly libertarian. For a Tea Partier, proposing this solution for roads would be political suicide. Again--the Tea Party is not libertarian, but rather a form of radical populist conservatism veiled in libertarian-esque language.
Posted by Steve Stofka at 2:36 PM

Email ThisBlogThis!Share to TwitterShare to FacebookShare to Pinterest
Labels: Phila2050