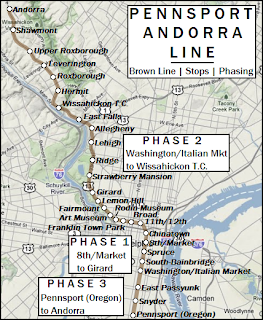 This line forms the northern and eastern spine of the Loop, and interconnects with the existing Lindenwold Line and Ridge Spur, as well as the proposed Tasker Park and Society Hill-Mt. Airy Lines; it is built to the same dynamic envelope (of course) as its existing interconnections, and is planned to eventually be able run ten-car trains. Its Phase 1 is also the easiest to implement.

This ease of implementation comes from the fact that it utilizes existing easements and rights-of-way wherever possible. Phase 1 replaces the Spur, for the time being, with a train that follows the current Spur line from 8th and Market to Ridge and Noble, and then follows a subway under Noble Avenue to about Broad, where it emerges into the City Branch Cut. It then follows the Cut through to its connection with the Pennsylvania Avenue tunnel, which has one in-use track in a space built for six; it runs along this tunnel's eastern half and into the cut north to Girard Avenue. The only new tunnel to construct on this line is, in fact, along Noble between Ridge and Broad--only about half a mile. Current Spur trains would be transferred to this line, eliminating the need for new equipment; the only remaining expenses are the installation of the trackwork, the third rail, and stations. Phase 1 would run two-car trains, Phase 2 five-car trains, and Phase 3 the full ten-car sets eventually envisioned.

The extreme lack of expense relative to the solution it offers: connection of Center City's northern sector into the heavy rail network, and the expandability of the plan, suggests merit for immediate implementation. More than almost any other Philadelphia2050 proposal, this one would solve a lot of problems right away. 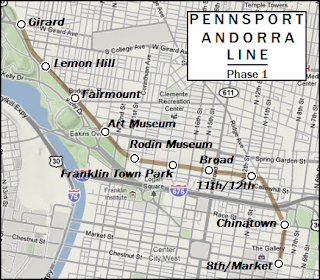