A Good Problem for the El 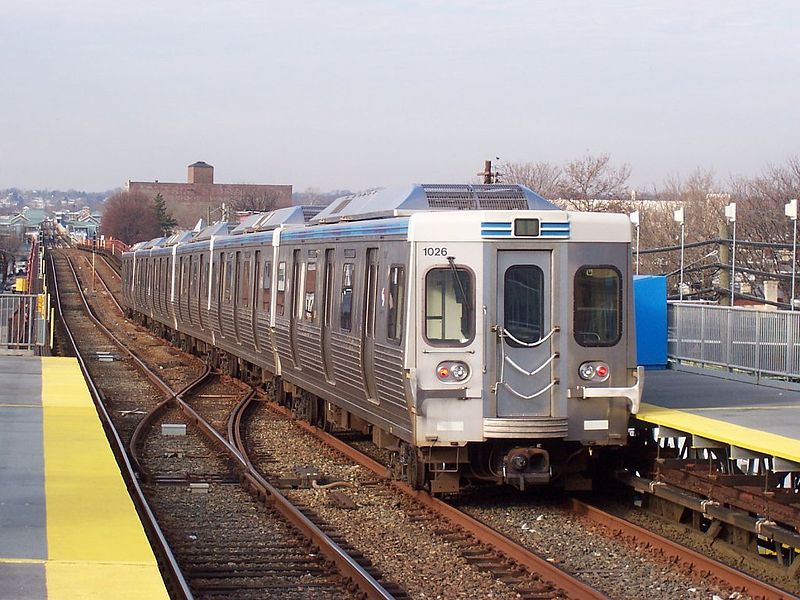 The Market-Frankford Line has a capacity issue. It's crowded during rush hour. And its crowding isn't just in Center City, it's end-to-end. Many people use the el to connect to the NHSL, 101 and 102 trolleys, and buses points west at 69th St., and buses points northeast at Frankford and Arrot terminals transportation centers. And with a ridership of just over 190,000 ppd, it is by far SEPTA's single busiest route, one that sees a surprising 60% more riders than the Broad Street Line.

Crowding indicates the el needs more space. As heavy rail -- infrastructurally, by far the highest-capacity of all modes -- any further capacity increases must come with relatively incremental improvements to the current physical plant. Some improvements are cheaper than others. A couple can be implemented immediately; others may take a little while longer. From cheapest to most expensive, we can:

- Use longitudinal seating. This one is by far the cheapest way to increase capacity, requiring nothing more than a refurbishment of the el cars' interiors, one which (they are halfway through their design lives) they are due for soon. It's also used in several other American subways -- notably, Boston and New York. Longitudinal seating decreases seating capacity, but it makes up for it by increasing standing capacity; it's also important to notice that in the current setup, the worst crowding occurs around the doors; longitudinal seating can help alleviate that.

- Convert to automatic train control (ATC). The el, like New York's 7 and L trains, is a single line with no branching. While no US transit agency has demonstrated the expertise to more than ~25 tph with human-driven subways (the MTA tried once and it failed miserably), ATC allows trains to be programmed to run at any frequency so desired. Increasing the frequency increases the runs a given trainset can make, which in turn increases overall line capacity. Indeed, when the 7's ATC installation is finished later this year, the line's peak frequency will be 28 or 29 tph -- just shy of one every other minute.

- Use full vestibules. There's a lot of unused space between the el's train cars. Use of full vestibules -- essentially, an articulating chamber between the cars (much like the one on articulated buses) -- would add a lot of usable space within the boundaries of the train. 10% more, in fact. Fun fact: full vestibules are now found on metros in every single country that uses them ... except the US.

The problem with this is that the current equipment is halfway through its life cycle and full vestibules would have to be a design requirement for their replacements. It would also require a rethink of el trains from a triplet of married pairs back-to-back-to-back to a single six-car unit. Indeed, thinking of trains as assemblages of cars rather than unitary bodies in their own right is often cited as the main reason why the US (whose railroad engineering expertise stalled in the 1950s) doesn't use full vestibules.

One can also argue that a full-vestibuled trainset naturally locks train length in for the duration of its life cycle. But that is only an issue if we are actively pursuing infrastructure for longer trains.

- Lengthen the platforms. Another way to increase the el's train capacity is, naturally, to use longer trains! But train length is currently proscribed by the length of the system's shortest platforms: therefore, it makes sense to increase platform lengths if we want to, well, platform longer trains. This is particularly problematic on the West Philadelphia elevated, whose platforms should have been extended to handle seven- or possibly eight-car trains in the recent rebuilding; the 2nd, 5th, 8th, and 11th St el stops, which can can only platform six cars and require tunneling to increase platform lengths; and the 69th St Terminal Transportation Center, where the track design of both platform approaches may well actually preclude any lengthening. Easier are the Frankford el's shorter platforms, which are now more than 20 years old and can conceivably be rebuilt to handle longer trains during a modernization program in the not-too-distant future.

The downside of this is that, if you're already using full vestibules, the benefits of lengthening the platforms comes not when you've lengthened the shortest platform, but rather once you've replaced the trainsets with ones that take full advantage of the longer platforms. Of course, this can be spun: Great! Our new self-driving, longitudinal-seating full-vestibuled trains increase capacity by some 25%! Now we have some thirty-forty years to lengthen all the platforms so that we can run longer trains and further alleviate crowding now that the easy stuff's done!

- Build an express track. This is perhaps the most difficult of the incremental investments. While the original plan for the el was for it to run express through Center City, and the trolleys local -- the trolley tunnel from 15th to 32nd being therefore incorporatable into an express line -- PRT, the el's original builder, was never able to finish the scheme, having run out of money by the time the line reached City Hall and only able to raise enough to build half of the system for the last (and most expensive) mile. As a result, the West Philadelphia and Frankford els were never designed to incorporate an express track, and there's a fair possibility the latter may not be able to, either. (Market Street is much wider, so you've got more room to work with.)

All that said, the fact that el crowding doesn't drop off as you head further out, but is rather end-to-end, makes it useful to look at an express track (perhaps as a couple of short segments of timed overtakes?) Such a track would offer a useful second service for passengers heading to 69th St or Frankford and thereby free up local capacity for interstitial stations.

- Build an interceptor line. Not remotely incremental, this -- by far the most expensive solution of all -- builds a new line that siphons off some of the el's traffic at its source. Built as planned, a Boulevard subway would function as this: it would intercept most of the traffic on the 14 bus and near the Boulevard, as well as (assuming a convenient transfer) buses on Bustleton, Oxford, and Castor avenues, leaving primarily the 66 feeding into the el.

Interceptors would also have to function as lines in their own right. This is either a feature or a bug: by intercepting most passengers taking the train to Frankford, you've opened up a lot of capacity. Capacity that can get filled up. In fact, the Media/Elwyn and Paoli/Thorndale Lines are both arguably interceptors for the el (via the 101 and 102 for the former, and the NHSL and 105 for the latter) ... and are themselves heavily used. Essentially, patronage has expanded not just to fill the core line but the lines built to alleviate capacity by intercepting it.

The Boulevard subway was last projected to have the same passenger counts the el today "enjoys", a fair percentage being intercepted el passengers. But it's more than likely that that capacity would quickly get filled up, and the el run at capacity again.

So it's good to think of new lines, and think of new lines not just in their own right, but how they would fit into the network; but to propose a new line solely to alleviate the capacity problems of another is not so good an idea. Induced demand is just as true for mass transit as it is for cars and bikes.