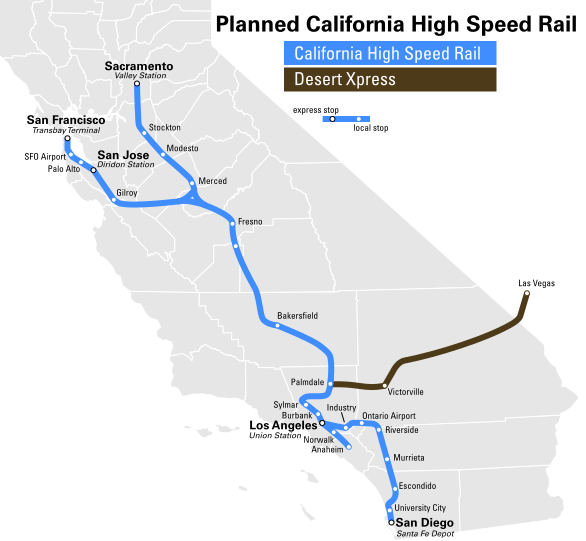 Basically, from Fresno most of the way to Bakersfield, on this map

How the TGV start? It started back in the 1970s when the ligne à grande vitesse sud-est (French for "really fast southeast line"), or as normally abbreviated, LGV Sud-Est, was planned and built. This line ran from Paris to Lyon, and eventually would extend to Marseilles.

But it didn't start in the cities. No, the line actually started out in the country. The physical LGV Sud-Est runs between Saint-Florentin, in Yvonne départment, and Sathonay, in Rhône (formerly Ain) départment. 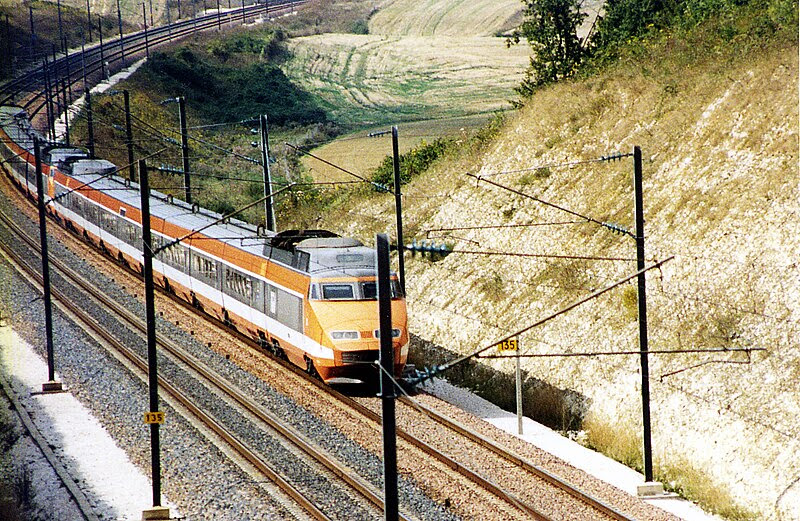 TGV, in original paint scheme, running on the LGV Sud-Est

The point I'm making is this is why California's LAO is dead wrong. Of course hardly anybody knows where Borden and Corcoran are, because hardly anybody needs to know. But then who knows where St. Florentin and Sathonay are? The LGV Sud-Est runs through the countryside, between what were, in 1980, Paris' and Lyon's most far-flung exurbs, and accesses the metropolitan centers via existing infrastructure*.

Likewise, even though Borden and Corcoran are the technical endpoints of the line, they're just interchange junctures. Passenger trains, such as the San Joaquins, would interchange onto the line in lieu of their current via-freight-lines routing at these places; their true origins and destinations would be well beyond Borden and Corcoran. The line is just a piece of infrastructure that operations (trains) utilize. Borden-Corcoran makes sense as a way of speeding up intercity trains' intercity travel, just as the LGV Sud-Est did. What the LAO is doing, in essence, is conflating the HSR-standard line with the equipment it's being built for.

Presumably, once the line extends past Bakersfield (Borden-Corcoran runs through Fresno and Hanford), HSR equipment would begin to be put into use, if not sooner; as the line extends, so too will the fastest trains' access area.

_________________
* Gare Montparnasse was rebuilt in 1969. The original station was built in 1840 as Gare de l'ouest (West Station); as a result, the infrastructure (station throat) predates the current patron experience (architecture).
Posted by Steve Stofka at 5:17 PM