Basics: Enclosure and How to House People

Enclosure, in urban design terms, is an assessment of bounding. There's a way of talking about it architectural terms, using "forms" and "voids", and in planning terms, using "active areas" and "passive areas", but either way it becomes way too technical way too fast: the language being used is a language of exclusion rather than inclusion, and when we talk about enclosure, we're talking about one of the most inclusive things humanly possible. That's why instead of using words, I'm using a series of three pictures to show the way enclosed space evolved during the half-century from 1900 to 1950.

I'm going to focus on enclosure within a block. There's another form of enclosure, the street, which is generally governed by the same rules, but the issue of frontage (which direction the façade faces) is a good deal more important when considering street enclosure than intra-block enclosure. In any event, the Old Urbanist had a good post which--while it talks about something else--viscerally demonstrates the poor level of street enclosure we endure in North America. Notice how well enclosed European streets are viz. American ones.

Intra-block, enclosure tends to be used as yard or garden space. This rear space nearly always exists; before being required by zoning, it was an amenity used by speculative rowhome developers to sell their product. The diagram shows the minimum level of open space guaranteed by the Philadelphia Zoning Code: rowhome residential (R10 and R10a) zones have requirements of 10% open space, 5% for corner properties (as a nod to the greater access to "light" and "air" available on those properties). Philadelphia rowhomes generally sit on 16'x90' lots and are 20' to 40' high*, and this diagram is a representation of the zoning envelope. Small developers in R10/a today, much as they did even before that zoning description was invented, build to the street line, eliminating any need for a front yard (although some occasionally appear, especially when the neighborhood went through a mail-order house round of development), and park all the usable yard space at the rear. This space was supplemented by the "public yard" function of the neighborhood square**, although it was relatively uncommon in Philadelphia for speculative developers to provide one. 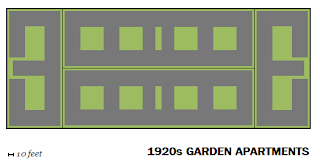 One of the major changes in urban housing was the development of the garden apartment in 1920. While after WWII, the meaning of the garden apartment morphed into something suburb-friendly, 1920s-era garden apartments can be said to be something of an optimum in terms of multi-unit urban housing. Setbacks were minor and usually enhanced the street, while the large interior courts, usually maintained as gardens, provided well-enclosed green space. Garden apartments of the period were normally five stories tall. Because the courts were surrounded by living units, the whole complex had a high degree of "eyes on the street", both inside and out, and just via changing the height, the concept could be scaled from downtown densities all the way down to suburban.

If, however, the market had found an optimal way to house people, both in single-family and multi-family formats, new Modernist architectural and planning theories, primarily Le Corbusier's Radiant City, and the growing predominance of the automobile and rise of autocentric planning and autocentric mindset, worked to extinguish these optimums nearly as soon as they took hold. Development of airlites (rowhomes' lookalike successors) and garden apartments had nearly ceased by the 1960s, save in bastardized versions amenable to autocentric-scale suburban development.*** In the city, the tower-in-a-park model came to attract American planners wielding the blunt-force tools of land clearance and redevelopment, even as European planners were developing a range of finer-grain tools. Perhaps the ultimate tower-in-a-park is I.M. Pei's Society Hill Towers, three towers on the hilltop overlooking the neighborhood and a wide swath of the river wards.

But the great failure of the tower-in-a-park is its lack of enclosure. Enclosure is built by defining space into a series of public or semi-public rooms, whether via streets or courtyards or quadrangles or neighborhood squares. By contrast, the tower-in-a-park model came out of an ethos of flowing parkland, a mindset which pictured habitation as a space within parkland rather than parkland as a space defined by habitation. But parkland is passive by default; without a clear definition of space and usage a park fails. Even large urban parks, such as Central Park, Prospect Park, Fairmount Park, or Golden Gate Park, parks which function as centerpieces, crown jewels in their cities' (or boroughs') park systems, also have other functionality which is, again, defined and contextualized by the city--by the park being the city's great enclosed space, rather than the other way around, the interspersion of city and passive park until the park becomes a barrier passable only by car. Corbusier foresaw this consequence and welcomed it; we today, however, have discovered how burdensome such a setup is, and so we rebel.

This fundamental difference between the way passive space is seen is a dichotomy that today finds new champions on different sides of the debate: New Urbanism, led by Andrés Duany, and Landscape Urbanism, led by Charles Waldheim. While we see this as just an academic dispute, the difference in the ways Duany and Waldheim see the city must give us pause--and we must reflect on both the good of Landscape Urbanism (James Corner Field Operations is behind some of the best, most spectacular public spaces in America today), the bad (Frederick Law Olmsted was behind the rise of the picturesque suburb, the form which every postwar suburb has sought to mimic), and the ugly (Landscape Urbanism is just a new enabler for towers-in-a-park, a development model which, in 99.9% of all cases, failed, but is still routinely envisioned by Corbusier dogmatists unwilling to let their master's bad ideas go).

James Corner is today's Olmsted, and just as good, but he is still a parks designer, not a cities designer. Cities enclose and define the types of spaces people like Corner design, but people like Waldheim would have you believe that parkland is the be-all-end-all of the urban space. It is not: there is more than one type of enclosed space, and when enclosed space loses its enclosure--its definition--it can very well morph into a barrier prohibiting urbanization and densification.
____________
*The height limit in R10/a is 35'; however, even Victorian mansards routinely exceed that height. Developers want the height limit raised to 42', something I agree with.
**When it existed. If one looks through old WPA maps, one will be struck by how few neighborhood squares there were--and still are--in large parts of Philadelphia. Paucity of neighborhood squares was one of the major (valid) criticisms Lewis Mumford leveled at cities, particularly in his Culture of Cities.
***I grew up in an airlite in an airlite-and-garden-apartment community likely built in the 1970s at the edge of the urban area. These housing optimums had, by this time, been bastardized all the way into suburban rental "community" design--an ultimate indignity.
Posted by Steve Stofka at 10:20 PM