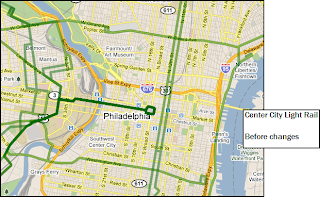 Light rail is one of the most difficult aspects of Philadelphia2050 to figure out. In my initial conception of the network, I had crammed both of planned new West Philadelphia light rail lines, the 37 from Eastwick via Lindbergh Boulevard, and the 49 from St. Joseph's University and Wynnefield via the West Park, into the existing Subway-Surface tunnel running from the corner of 40th, Woodland, and Baltimore to Juniper and Market with an additional exit at 35th and Ranstead. Since light rail is essentially a bus on rails, capacity for this tunnel is about as high as you'd expect. Even with five lines (10, 11, 13, 34, 36) accessing this tunnel, there is definitely still space for more.

But then I read this post on Human Transit, and a light bulb went on: why am I cramming everything into the tunnel? Just because I can? I had noticed some SEPTA routes which originate in Overbrook and Wynnefield running to South Philly--the 40 originates at the corner of Monument, Conshohocken, and Ford and terminates at Headhouse Square and the G originates at Lankenau Hospital and terminates at Columbus and Oregon, for example--and I wondered if there might not be some efficiency involved. Then I thought about my heavy rail network (to be explained in a later post) and how both my Ridge-8th and 19th-Society Hill lines are essentially two lines which inter-run via the Center City Loop and I realized that the 40 and G aren't one line so much as they are two lines which have been merged. 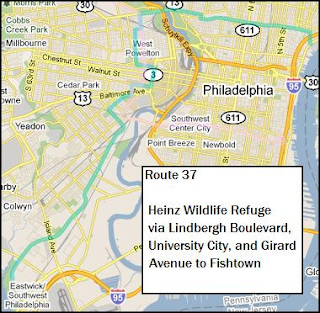 Using this, I could justify running my new routes onto Girard and Washington Avenues, thus bolstering frequency on the two east-west roads which bound Center City. The 15 doesn't come any more frequently than 15 minutes where the headway really needs to be 7 minutes, and the 64 is even worse*. As a result, crowding is a frequent issue on both routes. 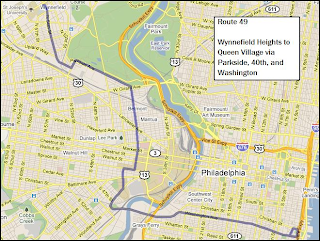 The modification is thus that Girard and Washington will both get one of my two new routes (37 and 49). But which one? By running the 37 on Washington and the 49 on Girard, I would keep both routes relatively short, but that would also require relying on the 64 for the 40th Street section. So, the opposite was chosen: the 37 would run from Lindbergh up the 40th Street connection to Girard, and the 49 from Parkside down the connection to the Grays Ferry Bridge and access Washington from there**.

But this proposal also undermines the usefulness of the 64, which runs from Queen Village to Parkside via Washington and 49th. Previously under Philadelphia2050, the 64's route had been modified to make the run via the 40th Street Connection, such that it, combined with the 15 along Girard and the waterfront light rail proposal, would form an outer loop around Center City. With the 37 and 49 following 40th, this would give the west side of the loop triple service--too much service. But if the 64 were to be scrapped entirely, Washington would still only have one route servicing it (while 40th and Girard would both have two routes), thus negating the stated aim of this restructuring. 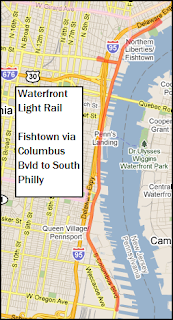 So the 64 was given a new purpose: accessing the job-rich, transit-poor University City Health Center, home to CHoP and Penn where a collector is very definitely needed between the two main points of transit access, both on the district's periphery--University City Station on the Regional Rail, and the 40th Street Portal--and the main jobs center along Civic Center Boulevard. The route shown in the diagrams is very provisional (at best) and will be expanded on in a later post. 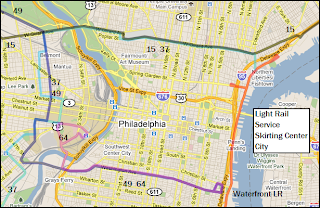 The waterfront line wasn't considered in large part because it appears there may be compatibility issues between this line and the others. The waterfront proposal, due to the need to preserve a freight spur accessing the port facilities further south, will, in all likelihood, use standard gauge DMU equipment, time-separated à la the River Line, while the other lines will all use broad-gauge electrified LRV equipment, like that used on Boston's Green Line. This compatibility issue will allow for connections, but not interoperability. If, on the other hand, the waterfront line is built in such a way as to be interoperable, or able to be converted into being interoperable, with the other lines, then that opens up a raft of new possibilities for the 64, one of the most delicious being the use of American Street to reach Fairhill, a neighborhood where the addition of new rail service is at or near its most difficult. 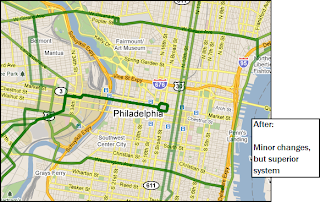 A final note about the light-rail map: like heavy rail, Philadelphia2050's light rail system is composed of interwoven overlain networks, which are broadly classifiable as urban and suburban. Urban can be further classified into four networks: the Subway-Surface, the Loop, the Upper Network, and the Waterfront Line; suburban can be further classified into suburban light rail (concentrated at 69th Street Terminal), New Jersey light rail (concentrated at Walter Rand), and interurban lines, like the former 100***, where the lack of concentration is the establishing feature. The ideal solution with all this is to give each network in the system its own color, but the sheer amount of colors (three heavy rail networks + four urban light rail networks + three suburban light rail networks + the regional rail network = 11(!) separate networks in the system) makes this something of a Sisyphean task. Untangling this maze is one of the major cartographic challenges of the proposed system.
________________
* The 64 being a bus line which would be upgraded, under Philadelphia2050, to light rail.
** Technically, the 40th Street connection is a one-way pair: the southbound line runs along 40th from its corner with Parkside and Girard south to Spruce and thence down 42nd to Woodland; the northbound line up 42nd from Woodland to Spruce, then up 38th to Filbert, then up 41st to Ogden back to 40th and across the bridge over the Main Line just west of Zoo. In the maps, the 37 line runs the northbound section of this connection and the 49 the southbound. Additionally, since the 11 and 34 both use Woodland east of 49th, I decided to run the 37 up 49th (which has available trolley tracks) to Chester, following the 13, in order to not inordinately overload Woodland; since the Grays Ferry Bridge's optimal access follows 47th, to keep costs down, the 49 follows Woodland for a brief section from 42nd to 47th.
*** The 100 is now called the Norristown High-Speed Line, or NHSL for short; in Philadelphia2050, the 100 number is to be given to a new route extending from 69th Street Station to Ivy Ridge Transportation Center (another later post).
Posted by Steve Stofka at 8:37 PM