A strange thing is happening at Drexel's academic quad. After suffering the "indignity" of being named the country's ugliest campus last decade, and needing to keep up with demand and growth, Drexel is modernizing and replacing a large part of its campus. And it's doing so with some damn good architects. Erdy-McHenry, for example, designed two residence halls, and a Daskalakis (note Greek origin) annex shows the same Bauhausian mold.

The two major academic hall projects, however, are the Papadakis (told you to note it) Integrated Sciences Building and the new LeBow building, which is to replace the (now-demolished) Matheson Hall. Papadakis is now complete and open; construction on the LeBow building will start shortly. Drexel Master Plan provides images of both: 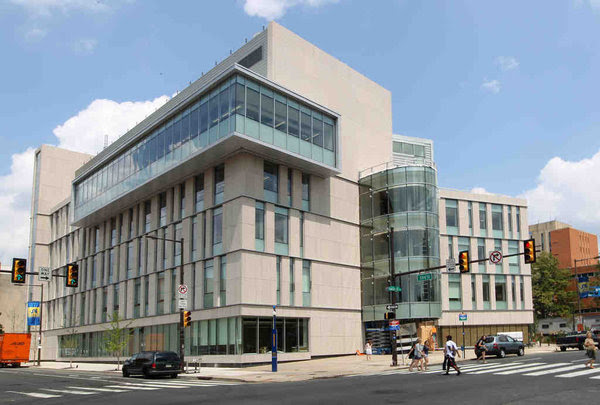 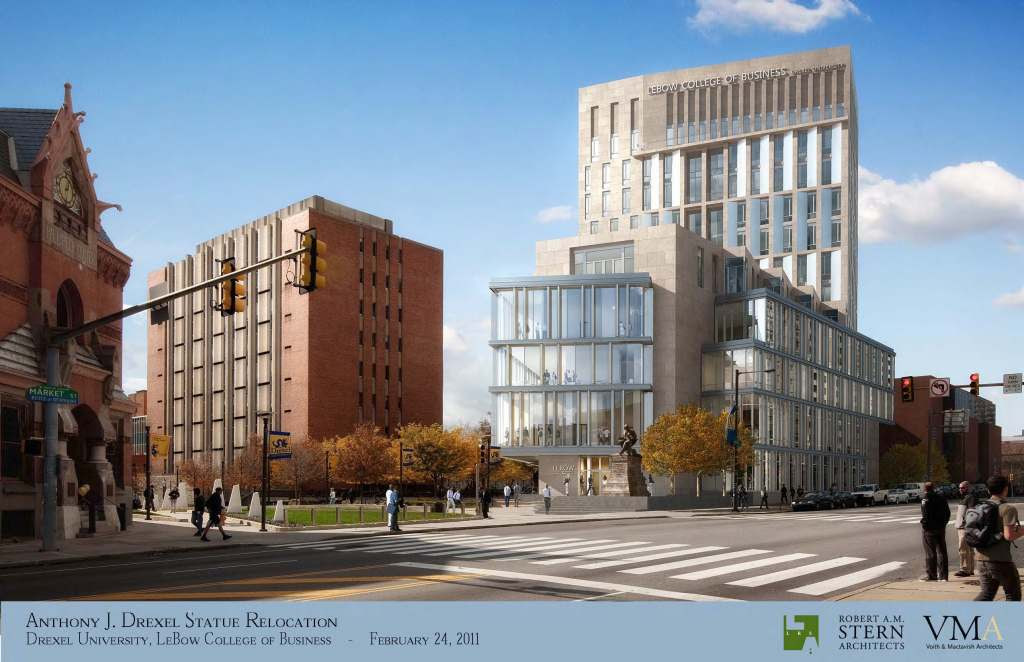 Both buildings are being designed with white façades, and in geometrical molds--decisions which hearken back to the genesis of Brutalism: specifically, the celebration of béton brut ("raw concrete") as a sculptural form. Because (especially high-quality) concrete is white, like at the Radian (poorer-quality concrete is grayer, however), and not everyone caught up in the Brutalist zeitgeist particularly liked concrete, several other white façade materials also got used, most commonly limestone. Temple's campus has examples of both trends: Anderson and Gladfelter Halls are limestone-cladded; Pearson, McGonigle, Wachmann, and Weiss Halls--as well as the Paley Library--are concrete-cladded. (Pearson and McGonigle's are being sheathed in their current renovation project.)

Another major element of Brutalism is it came into vogue during the 1960s; as the decade marched on, the demand on design became increasingly "riotproof". And so the white (more usually gray) concrete and stone (and occasionally aluminum) high Brutalist buildings morphed into these looming low-rise brick anti-urban education fortresses, buildings which deliberately turned their backs on their surroundings, so to speak, offering only an easily-controllable entryway between inside and outside. The great repudiation of high modernism, postmodernism, was as much a reaction against this as it was against the '70's monolithic glass steel tubular towers. (Even high Brutalism was oftentimes extremely ugly, except in the hands of masters such as Kahn and perhaps Pei, but late academic Brutalism was purpose-built ugly.)

Ignoring, for the moment, the interesting historical issue that one of the styles Stern was revolting against when his career started was Brutalism, what we have with Papadakis and LeBow are two clear examples of a new Brutalism, by which I mean an architectural style celebrating geometrical form and classical whiteness**. But, unlike the examples of high and especially later Brutalism, what we are looking at is a style that does not insulate itself against the street, but rather opens itself up to it (if not quite outright celebrating it). Inside can be seen from outside and so forth.

This "Neobrutalism" seems to be flowing from an admixture of Postmodernist and neo-Bauhaus ideas, and general architectural fads--but this may well be the vanguard of 2010s academic architecture. Howso urban is it, really? Better than late Brutalism--but is it as urban as the work of the past decade?

Aesthetic questions to ponder.
____________
* A campus-related project also shows certain similarities.
** ...More like Renaissance whiteness. Greek and Roman ruins, by the time the Italian Renaissance rolled around, had lost all their color through the fading of paint, among other things. That said, the Giza pyramids were also built shinily white.
Posted by Steve Stofka at 3:02 PM