What should high-speed rail look like in Philadelphia County? 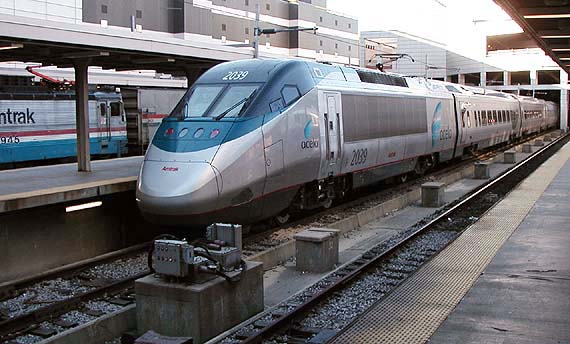 Amtrak's current Northeast Corridor High-Speed Rail (NECHSR) plan, while it is admirable in many respects, contains an odd flaw: once it enters Philadelphia County all reason flies out the window and a contractor's wet dream sets in.

I am talking, of course, about the proposed tunnel running approximately ten miles from Frankford Jct. to the airport. This tunnel has a certain few advantages: (1) it avoids Zoo Interlocking, one of the most complex railroad junctions in the country; (2) by bringing HSR to Market East instead of 30th Street, it returns intercity rail to the heart of Center City; and (3) it allows for a fast, direct Center City-airport connection--indeed, this airport connection would bring PHI only about 40-45 minutes from Midtown Manhattan, which is (surprisingly enough) about as close as JFK currently is via rail, due to the time it takes the E and F trains to wind to the Airtrain connection and the need for the connection itself. (LIRR is no doubt somewhat quicker but also much more expensive.) The second reason, in particular, is why the normally levelheaded Paul Levy has been fawning over this plan.

But it's a bad plan. It's a bad plan because (1) it is freaking expensive to bore a ten-mile-long tunnel through an alluvial floodplain under a highly urbanized area--and to maintain it, since it will reside below the water table--(2) it bypasses the natural junction (Zoo) between two high-speed rail corridors and makes it supremely difficult (if not prohibitively expensive) for the Keystone Corridor to meet the NECHSR in a proper manner; (3) there is little to zero chance that a Market East HSR station, in any form, would amount to little more than an unappealing warren of tunnels; (4) the Pennsylvania Railroad left behind a legacy of a highly-engineered ROW amenable to high-speed use in an urban environment; and (5) said use conforms with European best practices, whereas the current proposal does not.

How expensive is freaking expensive? The kind of bore being proposed is the single most expensive type of tunnel possible: it runs through a soft geological environment with zero tolerance for surface subsidence. It would cost more, mile by mile, than even the Gotthard Base Tunnel. The expense of this tunnel is so great that it amounts to about a tenth of the total budget of the plan (about $10 billion, or a billion a mile, out of a budget of roughly a hundred billion). When a single budgetary item commands that much expense, one must analyze and ask why: why do we need to spend a ludicrous amount of money in Philadelphia for what amounts to marginal access improvements? Knowing SEPTA, politics--and SEPTA's "get-off-my-lawn" attitude--is most likely to blame.

What really rankles is there's a better, cheaper way of doing this. (1) Treat Zoo not as an obstacle but an opportunity. The interlocking is, after all, built for high-speed sorting from two main lines (the Northeast Corridor to New York and the Main Line to Harrisburg) onto two station leads* and a freight cutoff, as well as from the freight cutoff onto an interchange track with the former Reading Railroad--the line which is now Norfolk Southern's main route into Philadelphia from Harrisburg. Zoo is thus both (a) the juncture between the NECHSR (which roughly follows the Pennsylvania's New York-D.C. main) and the Keystone Corridor (which follows the Pennsy's Philadelphia-Pittsburgh main), and (b) the northernmost limit of 30th Street's station lead. (2) Straighten out the tightest curve--Frankford Junction. It can quite easily be done. Erie Avenue, which turns into Torresdale Avenue, almost kisses the NEC both just south of the junction and just north of it--an elevated cutoff along this road will allow HSR to develop to its full speed north of Zoo Interlocking while Frankford Junction still sorts commuter and freight trains towards New York, D.C./points west, and South Jersey. South of 30th Street, SEPTA already runs a regular, reliable airport train to Center City, and if Amtrak so chose to have a direct airport train, the opportunity--following historical freight easements along the west bank of the Schuylkill--is still there. Splitting the line like this furthermore allows the fastest trains to skip Airport entirely. This can be done with around a hundred million dollars, less than even a single mile of the tunnel proposal--and this proposal can be done even with FRA regulation as stingy as it is--so wide is the NEC main line!

For my money, the best place to spend $10 billion is not in the urban places, where high-speed lines can quickly and easily be connected into the existing urban rail network (see: France, Germany, Italy, the UK), but rather between the cities, straightening out onerously curvy routes and boring fast routes through mountains. The costs of building all-new HSR ROW in urban areas are, almost without exception, far too great for the limited service improvements they offer.
____________
*30th Street Station, Philadelphia's intercity rail station, has two platform levels. The lower level, parallel to the Schuylkill River, is the NEC, while the upper level crosses the Schuylkill River towards Suburban Station, the subterranean replacement of Broad Street Station.
Posted by Steve Stofka at 9:43 PM