Streetcars have become a major fad over the past few years, ever since Portland put in theirs.
In Portland's case, the streetcar is a pretty decent investment: it acts as a circulator overlay on a high-quality light rail system. But after they put theirs in a bunch of other cities began to construct streetcars for themselves.
DC's H Street line was the second major streetcar; it is also the first that suggested an underlying problem. You see, H Street is supposed to be a spine corridor, linking the city's east side with its west. It thus needs to be built to a higher standard capacity than ... that. 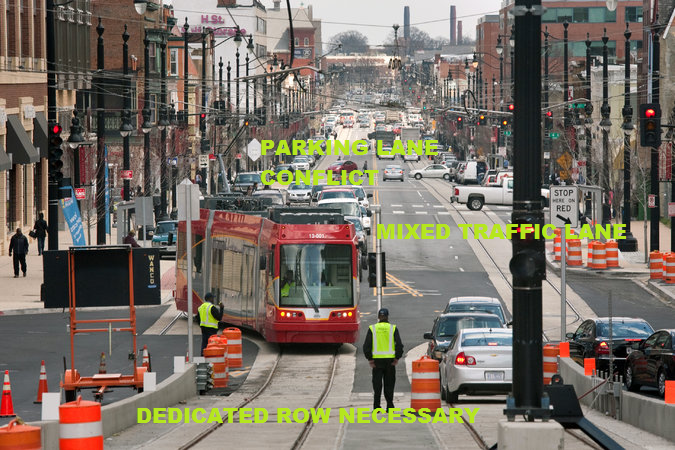 This particular design -- at the time, novel* -- contains two catastrophic mistakes that permanently mar this line's capacity:
H Street was a difficult design challenge. The street is, surprisingly, 90 feet wide, and it is fairly congested -- its AADT hovers a little above the max capacity of a two-lane street -- and a full light-rail buildout would have likely required (among other things) taking of a parking lane significant street reconfiguration, much like 1st Street in San José, a bright spot in the VTA system.
Indeed, it is arguable that the H Street Line's optimal placement would have been for the light rail to lie between the sidewalk and the parking lanes, with a road diet reducing auto capacity just enough to convince (some) drivers to Take Other Routes. This arrangement, however, remains problematic in its own right, and is not the thrust of this post -- and I have talked about these kinds of things before.
At least two Midwestern cities have taken the (failed) H Street approach and applied it to themselves: Detroit and Kansas City. I haven't been to Detroit, but I will note that Woodward Avenue, which is eye-poppingly wide relative to traffic, can easily accommodate every single mode, if the designers chose to.
What is perhaps most shameful is that within these ... things ... lies the fact that the powers-that-be continue to refuse to give up any street space for cars, no matter how ridiculous the car gluttony may be *cough cough Detroit, Kansas City cough cough*, and are packaging it as a political sop to Millennials.

No. The transportation investment that would please us the most is in quality bike infrastructure. We want to ride around everywhere. Bike-friendly cities are Millennials' cities.
____________
* Portland's downtown streets are only 40 feet wide; historic streetcars ran in the middle of the street. (See, for example, Philly's trolleys.)
** And good BRT -- Cleveland's Euclid Avenue being the only such example in the United States today.
Posted by Steve Stofka at 10:00 AM