I checked out Franklin Flea this morning, and found out something surprising about Strawbridge's.
A lot of people--especially people who were never in it before it closed (like me)--assume (like me) that its ground floor was a single large sales hall. This is not--nor was it ever--true.
In reality, Strawbridge's ground floor has several discrete parts: the 1928 structure is bisected on its latitudinal axis by its elevator core; the boar sits where the hallway that serviced this core crosses the one linking the entrance (cosmetics and accessories?) hall with the Food Hall. A secondary hallway runs between the end of the elevator core and the wall between the 1928 structure and the late 1800s-one on the west side. I am unsure, but I think the jewelry department may have run the length of that section's ground floor. (The Department Store Museum directory implies that part of the Men's Store was on the ground floor as well.) Compared to the open, warehouse-like layouts we expect at hypermarkets and yes, even mall department stores, nowadays, Strawbridge's layout is very difficult to work, and insisting that a single entity take over what remains of the ground floor selling space now that two office lobbies have been carved out of it surely ranks as an endeavor in fruitlessness. Indeed, it is hardly meet to insist that the Food Hall--reportedly being considered for an Eataly--be leased to whatever other entity/ies lease(s) the remainder of the ground floor*.
Leasing solutions?

So it appears that the there are three remaining halls and change off the store's central hallway (leading through the elevator lobby). If we assume that Eataly will get the Food Hall, as seems increasingly likely, this means that the rear portion of the 1800s structure, whatever remains of its forward part, and the entrance hall would be in play. The size of the older halls makes them ideal for inline stores, so let us focus on the entrance hall.
There are no fewer than three entrances to this hall from Market Street, which implies that it could be split three ways. Two, if hall to Eataly via the boar were to be kept open. Or even four--it's that large. But of course, doing so would undermine, perhaps ruin the ground floor's grandeur. And to make things more difficult, the Food Hall does not have its own street entrance. But only a very large presence could fill up the Main Hall. 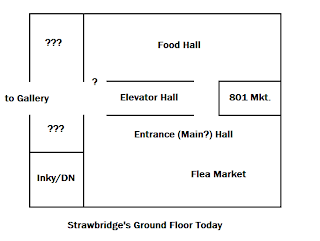 Perhaps the trickiest part of this endeavor is engineering ways to ensure that the entrance hall remains internally linked to the basement and second floor. My position is that until and unless we have a clear tenancy plan that would fill both parts, we should not--cannot--sacrifice these internal linkages. This implies that if (when) Eataly fills the Food Hall, we should seek a plan that links the entrance hall and the elevator hall together. But of course such a plan would cut the Food Hall off from its historical main entrance, in front of the boar. And it's entirely possible the Food Hall isn't as large as I think it is.
But--the final note--with the persistent Gallery Bloomingdale's rumor**--and my own Circuitous and Serpentine post of a year ago--whose original concept now bears updating (though it is still valid)--the Gallery has space for three anchors, and if one of them is Bloomie's, that means that the other two just became that much more valuable. Could we be looking, in the near future, at a Gallery anchored by three of the following--?
A Gallery able to compete with King of Prussia for high-end inline retailers? Ah well, one can only wish.

___________________________
* BTW if anybody knows whatever happened to the original Food Hall fixtures, could there be any way of bringing them back for Eataly? 'Cause those look pretty darned cool.
** The fact that Bloomie's passed up on the Daffy's space (1700 Chestnut) because it's "too small" does not sound like an outlet concept to me. Outlets, like Saks Off 5th, Last Call Neiman Marcus, and eventual Daffy's lessee Nordstrom Rack are typically ~30k sf.
Posted by Steve Stofka at 6:10 PM