Philaphilia and Philly Bricks, with their love of historical images, give us two looks at the development of Philadelphia from more or less the same vantage point. 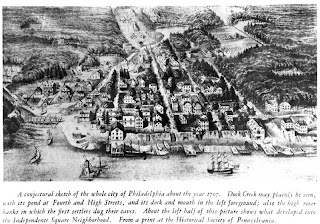 In 1707 the city had just been founded, and this view shows how it was still basically just a small country town, built entirely in an area that is easy to walk around: south of Arch, north of Spruce, and east of 4th. Most of it was on the Old City side of Dock Creek (thus explaining Elfreth's Alley's age). Notice the building placement: it is not random. Since time immemorial, blocks--especially planned blocks--have had their first buildings built in the middle of the block, and as time progressed, to the edges (which became the most valuable properties) and deep into the core, nested around a series of ever-narrower alleys. The residential parts of Wash West preserve this structure quite well. 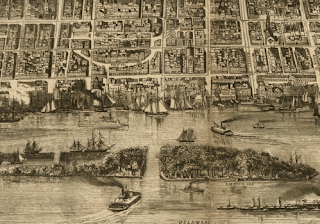 Looking at this mid-nineteenth-century view of this same spot, the pattern of densification can clearly be seen, with most blocks bi- and trisected by alley networks of varying complexity. Furthermore, the first major intervention to the grid is visible: Dock Street, following the old Dock Creek, curves around, sweeping inland. The creek's headwaters were at what is today 4th and Market; Dock Street, however, terminates around 3rd and Sansom (about 1.5 blocks southeast). This is because the land value along Market and (especially) Chestnut* is so high that the expense of eliminating interventions can be borne by the landowners--typically banks and financiers--looking to locate at the center of the action.
__________
* Philadelphia's PLVI at this time was essentially the 400 block of Chestnut.
Posted by Steve Stofka at 7:49 PM