The City As Ideal

This image was taken from local blog Naked Philly, and is of über-narrow Kenilworth St. The houses are modernist in style--yet the charm is Old World. This is the type of street and community Nathan Lewis talks about...

Which brings us to traditional urbanism's preeminent problem. It's an ideal. Nathan Lewis treats the city as Form. He prescribes and dictates. While his ideas are good, his style of presentation is harshly Mumfordian. The problem is still the idea of "the city as problem" (rooted in the unlivability of the Victorian industrial city), only this time transposed to suburbia (where social isolation and transportation inefficiencies become driving problems) and a critique of New Urbanism based on its practice. But New Urbanism itself is rooted in a like critique; the whole history of the problem of the city is a succession of like critiques. Could it be that the so-called problem of the city is rooted in a discontinuity between the way the city is and the perception of what it ought to be? that the problem of the city is one of ideal vs. reality? In other words: that when urban theorists have gotten to work on the problem of the city, the solutions are prescriptive rather than descriptive? It occurs to me that such an impulse behind urban theory, the formulation of idealization as solution, leads inevitably to the utopian dream, the idea that we can create a perfect society. But the critique is obvious: one man's utopia is another man's dystopia. All utopias are also dystopias--yes, even More's--because this pursuit of perfection always impinges upon freedom; and conversely, all lived dystopias must also be utopias--yes, even Zamyatin's, Orwell's, and Huxley's--because the utopian impulse is a desire for perfection, and someone must have thought that such a situation would be the ideal situation of humanity.

Where am I going with this? That suburbia as we know it is a dystopia precisely because it is a utopia. It is a problem precisely because it is a solution (to the urban problems of the early 20th century)...but a solution to the problem of suburbia rooted in the same framework that gave rise to suburbia as a solution to the problem of the city will inevitably lead to a new problem of the city and another solution. In fact, so long as this neoplatonic essence rules theory, the problem becomes endless: the solution, once fait accompli, gives rise to its own undoing. So too the "traditional city" of Lewis' terms. There are multiple ways to build for people, and although the traditional city is one of them, it is hardly the only one. Let me demonstrate what I mean: 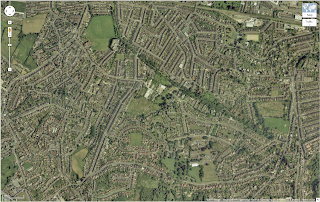 This image looks like suburbia, no? Long, meandering curvilinear roads, surfeit of green space, shot internal connectivity. Let me let you in on a great secret: this is Bath, England, and it was built in the mid-1800s, long before the introduction of the automobile. When you zoom into street level what you see are scenes such as this: 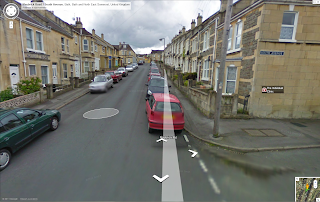 Terraced housing (British rowhomes), narrow streets, terminated vistas, and when you turn around, jaw-dropping vistas of the surrounding Somerset downs. From the street, it looks like city; the sky, suburbia. In Bath one sees the culmination of British Georgian taste and some of the earliest representatives of later elaborations--leading eventually to the ones seeking to do away with the city altogether. In one lens, Bath is a city; in another, a suburb. In one lens, Bath is even a traditional city!

While we can all agree that the intense autocentrism of the built form present in modern suburbia is a bad thing for a variety of reasons, we have to also recognize that there is no single perfect way to house humanity, but rather a variety of good ways. The urbanism of Bath is comparable, for example, with the prewar airlite in its effort to meld urban and rural and attempt to accommodate new technologies. To claim there is one perfect way (as Mr. Lewis does, or seems to), is frankly a fallacy of the very worst sort. To attempt to promote one's
"perfect" way in the face of a policy régime geared towards its antithesis while at the same time failing to ask how that régime is to be changed to allow different building traditions--questions Mr. Lewis has never asked--has little chance to be successfully emplaced. In this regard, Charlie Gardner is asking the right questions, because he is asking after a solution rather than just selling an idea.
Posted by Steve Stofka at 11:33 AM