This is the second in a three-part series on improving transit in the southern part of the Northeast. The first focused on the Washington Metro, and the third will focus on mass transit in Baltimore.

MARC is Maryland's commuter rail system. It certainly does its job, with three lines emanating from Union Station, and three lines emanating from downtown Baltimore. The Penn Line runs from Perryville via Baltimore Penn Station to Union Station; the Camden Line from Camden Station in downtown Baltimore to Union Station; and the Brunswick Line from Martinsburg, WV, to Union Station. Along with the two VRE lines from Union Station to (a) Fredericksburg and (b) Manassas, MARC offers adequate commuter rail for the D.C. area. In concert with the Metro, this means the D.C. metropolitan area has the third-best transit infrastructure in the Northeast, and fourth-best in the nation, after New York, Chicago, and Boston.
MARC could, however, be better. Its charter doesn't just call for D.C.-area commuter rail, it calls for commuter rail for all of Maryland. Its Baltimore lines are relatively poor, concentrating along the Royal Blue/Northeast Corridor axes rather than branching out throughout the metropolitan area, and it lacks service to either Maryland's state capital, Annapolis, or its sixth largest city, Hagerstown, despite reaching all the way to Martinsburg. MARC's paucity of lines, relative to potential (VRE has two lines, but all of the historic lines heading from D.C. into Virginia are accounted for between it and the Metro's Orange Line) makes it the Northeast's worst commuter rail system in terms of service scope.
My improvements to MARC go well beyond just extending the Penn Line to Wilmington to interconnect with SEPTA. To offer excellent rail transit options at a commuter and low-level intercity capacity, the proposal is to merge MARC and VRE and to transform the system into a double-S-Bahn-type network, with an S-Bahn set emanating from Baltimore and a second from D.C. The current MARC network, when combined with VRE, produces a three-line double-S-Bahn network (Penn Line, Cumberland-Fredericksburg Line, Camden-Manassas Line), but only one of these three lines has a Baltimore nexus. 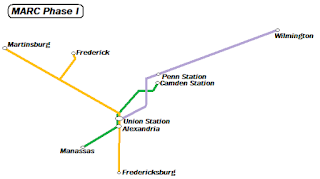 Line additions thus concentrate on Baltimore. Two new lines are proposed, extending from Gettysburg, PA via Baltimore to Frederick, with a branch to York, PA, and one from Westminster to Annapolis. Additionally, a branch of the Cumberland Line from Duffields (WV) to Hagerstown (MD) is proposed. 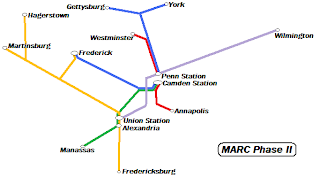 The plan of action for this new system would be to activate the lines into the city center first. These would take the form of two new lines terminating at Camden Station (one to Annapolis, and the other Frederick), and two at Penn Station (one to Westminster, and the other Gettysburg/York), constituting Phase II. Finally, once the lines are all in use, the interconnection between Camden Station and Penn Station will be built, linking the two sections of the Gettysburg-Frederick and Westminster-Annapolis lines together. 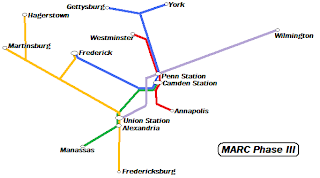 The line names are interesting. After thinking about it a bit, I decided to go with a 3-letter initialism, such that each line has the north origination first, the via city second, and the southern terminus last. Thus the Penn Line becomes WBW, or Wilmington via Baltimore to Washington, and the Cumberland-Fredericksburg Line becomes MWF, or Morgantown via Washington to Fredericksburg. This system is elegant and seems easy to apply to other networks, too.
A couple of interesting features are present in this system. First, because Martinsburg and Hagerstown are opposite poles of a micropolitan area, a shuttle train between the two would be immediately suggested; this shuttle, due to the nature of the system just outlined, would have a fare union with the broader network. Secondly, this network passes several Civil War sites (both Bull Runs, Fredericksburg, Gettysburg, Antietam), which effectively makes this system a Civil War railroad and thus able to provide excursions for reenactors, history buffs, school trips, Scouting trips, etc. Excursions, by their nature, are not scheduled trips; however, the equipment needed to run this system normally makes providing them a worthwhile promotion--a good loss-leader, if you will. And finally, this network suggests further extensions, including one to Harrisburg, another from Westminster to Hagerstown, and a third from Martinsburg to Cumberland.

MARC is an average system, by American standards. Let's make it better.
Posted by Steve Stofka at 10:17 PM