Something interesting is happening in the village of Lafayette Hill. A Main Street is coming to be.

This, despite the majority of this Main Street consists of mid-century strip malls and commercial pads. It's a Main Street in use, though decidedly not form. Take a look. 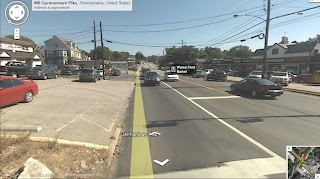 It runs like this from Joshua Road to Church Lane.

But, since the buildings are aging, the majority of chains have moved out, to newer, shinier digs around the Plymouth Meeting Mall. In their place are more locally-owned stores, more boutiques, more inns, and what are generally considered the two best Persian cuisine joints in the region. 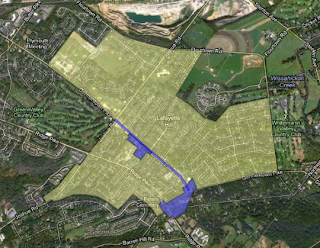 Lafayette Hill is the overgrown agglomeration of two older villages: Barren Hill and Marble Hall, which has led to its bipolar development and a small gap in the middle. But the density, the connectivity, the ingredients are all there--and, as the buildings age and rents come down, the more interesting uses, too. 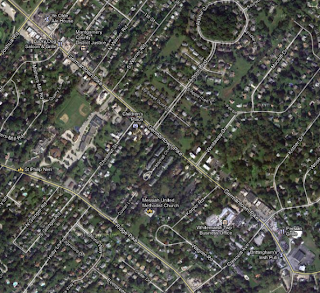 Which leads to the greatest problem in front of Lafayette Hill: its very autocentrism. Strip malls don't create a pedestrian atmosphere, and despite the fact that it's the same size as e.g. Lansdale, walking rates are much, much lower. So what's to be done?

Brand it. Give it a "Main Street Lafayette Hill" identity; play upon its existing strengths. Have a citizens' day; take over a parking lot and use it for a farmer's market; install sidewalks all the way up and down. Make de jure the de facto parallel parking already in front of the Wawa and extend it all the way up and down Germantown.

And in the long term, change the zoning code to remove setbacks and favor rear parking*. Curb minimums, and encourage walking plans for the bars. Preserve the Manayunk vernacular and Victorian buildings already here, of which there are a few. And allow structures to grow to 3-5 stories.
___________
* Transit access is relatively poor, unlike Conshy or Paoli or Lansdale.
Posted by Steve Stofka at 1:44 PM